Click links below to jump to a specific event:

This site will be undergoing re-mastering of the photos intermittently - please check back often!

This site logs IPs for troubleshooting purposes only

This site is best viewed with Internet Explorer 6 or higher.  Other browsers may malfunction.

Wait for download to hear the LFN theme! (press play, and music will start after full download)

Below are scenes from two conventions for the late, great, USA network series, "La Femme Nikita."   "Close Quarters Standby" was a phrase used on the series, that meant you had to stay at Section One (headquarters) to await an important mission.  For the second "La Femme Nikita" convention, I was chairperson of the Medical Committee, so I was more of an insider for that one.  There are also scenes below from a charity organization's auction, called, "Lights, Camera, Auction!", that I attended with my son, Craig, back in 2000.  All three of these events were held in Toronto, Ontario, Canada, where the show was filmed.  I've left most of the pix unlabeled, as if you don't already know who you're looking at, you probably won't care... 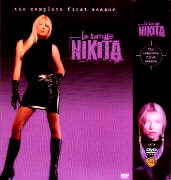 Robin & Carol (First 2 pix) were the founders of the LFN cons.  The rest of the shots are of behind-the-scenes folks, the convention committee, security, as well as fans who won door prizes.  A few shots of me, two of those with Sue of Rhea's Obsession, a band whose music was often used on LFN.  The next photo is the exterior for Nikita's apartment.  Costumes worn by Roy Dupuis and Peta Wilson, set pix.  Various shots, including Cathy with Gene Glazer and Alberta Watson, Carlo Rota ("Mick"), Don "Walter" Francks, Gene "Operations" Glazer, the "Goatee Guy" Murrin twins  Don Francks' band, Matthew Ferguson ("Birkoff") The autographs of Don and the Murrin twins ("Goatee guy"), as well as the infamous 'throne' pic.  EZ-Bee's sword/belly dance, and a cartoon of Karan she won, drawn by Doug MacCrae.

Click: Some ladies who did very funny parodies of songs, changing the lyrics to suit LFN themes. 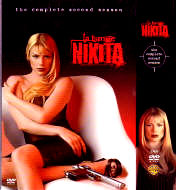 Above are scenes from the "Mission Log", which recorded the second LFN convention.  The lady in the next pic, "Denise 2", is the composer of this memento, but the pic of her is from CQS 1.   Various shots of the stars, my friends, mementos, blurry me hanging out with Alberta Watson and Cathy, Rhea's Obsession in their suite.  Ez-Bee and me with the Murrin Twins.  Two of my friends win the set tour, and meet Roy "Michael" Dupuis (Photos taken by unknown persons).  Two more of my friends hanging out at the hotel lounge. The sweater Kris is wearing in the final shot was Matthew (Birkoff) Ferguson's, that she won at auction. 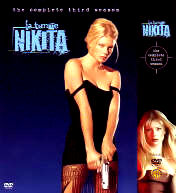 Alberta Watson with a cute fan...

Director Jon Cassar, with recurring LFN guest star, Nigel Bennett, Alberta Watson, Gene Glazer, the husband & wife team of Lindsay Collins (Female Torture Twin) and Barclay Hope ("Psi Factor" & "Stargate: Atlantis"); the little boy in front of Barclay is the son of Nigel (Petrosian) Bennett (The only children there, he and my son Craig (Above, with Alberta) were hanging out together) Nigel described my son as "sweet" when I asked if Craig behaved in Nigel's suite; the now-deceased Malcolm Xerses, and Don Francks with the fan who won his jacket. Clowning and such from the stars (Beckyta won a wig, and Carlo wore it), and a used soda can auction that included Gene Glazer, the Murrin twins, and Steve Shellen ("O'Brien").  Don't ask.  Also, the auction of the "Brainwash"-ing helmet, as well as Michael's cello, from "Gates Of Hell"

Are you being taken to the "White Room" by your peers?

This web site is in no way associated with the La Femme Nikita® film or series, its actors, or any other affiliations related to the project.  La Femme Nikita® is a registered trademark of Fireworks Productions, USA Networks, and Warner Bros®   All photos on this page were taken by Natalie Larkowski© with noted exceptions, such as the cover art for the series DVDs, and are not to be used elsewhere without expressed permission. 09/23/2005